A Bunch of Fixes

I was able to spend some time tracking down so bugs pointed out by Randy and Daniel in the last release. The odd parallel linking gouges have been solved, the surface angle bug has been fixed, and I updated the toolpath dialog to make the surface angle more intuitive ( I hope). 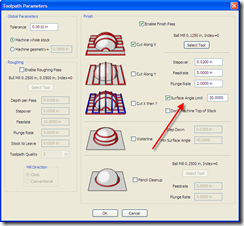 Here is my question to everyone:

Currently, the surface angle setting for parallel finishing is disabled when waterline is used. I can see where some would want some level of overlap between the two and the current system doesn’t allow that. I’m leaning toward leaving the separate parallel finish threshold value independent from the waterline threshold. Comments or complaints?