One more feature I’ve been compelled to add for version 4- arc fitting on waterline paths. This has been a request for a while and it never seemed to be that important from a competitive point-of-view or in terms of the reward given the development effort. A couple of things happened in the past month to change this.

First, I’ve been machining a lot of Renshape lately with medium-sized bits. This combination lets you really rip through the material- you’re likely to be limited by your machine instead of the material. I found cases where my Tormach mill would start vibrating badly if I increased the speed above a certain point when it was cutting the waterline paths. It actually sped up and quieted down when I slowed down the feedrate. My thinking is that the constant velocity mode choked on all of the tiny segments- either they were too short to properly process in real time or they were not deemed smooth enough to blend at that velocity. I have no idea if this speculation is correct but the effect was very clear. I think I will be able to push arcs much faster than tiny segments so this should allow faster machining times while getting a better surface finish.

Second, I’m annoyed with the behavior of some of my competitors and that has me working overtime to get MeshCAM into a state where it’s clearly the better choice no matter what use you have in mind. Obviously, I feel like I can make that case pretty well right now but I want to remove any doubt. 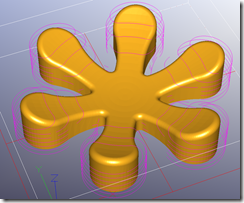 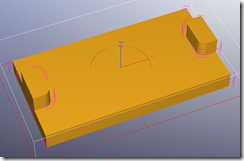 The unfortunate thing is that this code requires massive changes to the path linking code, the post processor,and lots of the internal plumbing. I’ll need everyone to stress test it a lot once I get a release out.

The code is hugely useful as-is but I think there is significant room to improve it. So far it doesn’t seem to affect the calculation time so I think I can afford to add a lot more complexity to come up with the most optimal solutions without slowing anything down.

I have most of the code done. I just need to change the post processor and to add some UI to get it working. On some timeline this will be added for pencil, and roughing as well. For now, it’s best to keep it limited to one part of the code where I can experiment without the different modules getting out of sync.

I hope for a release in the next week. In the mean time, please send me any feedback you have on V4. If you’re using it please let me know even if you just tell me, “I use it a few times a week and there have been no problems.” Any feedback is good feedback.