Below is a couple of shots of the new surface angle code in the parallel finishing. The angle was set for 45 degrees and it seems much more consistent than the old code. It’s also much faster to compute. There are a lot of retracts but this seems to be somewhat common for this type of path when I’ve looked at the competition. I have two ways to fix this:

1) Use a more complete toolpath linking algorithm that will make additional checks for better linking options.

2) Compute a complete offset surface of the geometry and preplan the path based on the surface angle.

#2 would give better path linking but would take much more time and memory to compute. #1 will be faster but less optimal. In the short term I’ll probably leave it as-is. It seems roughly competitive with the market, it’s still better than the current code, and I need to move on to get something released sooner rather than later. After people look at the speed of the new code they can vote for what they prefer- faster or better. 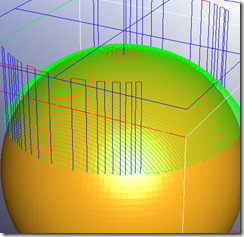 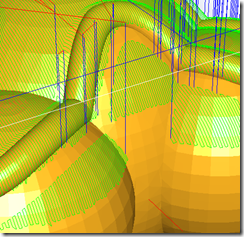