Below is a shot of the new changes to the finishing toolpaths. The paths are now projected down onto the geometry and properly subdivided . You can see how the supports are avoided and that a minimum amount of stock (and no air) is cut- a big improvement from before. I have the “Don’t Machine Top of Stock” working and I now need to make the threshold angle work properly. I’ve got some ideas about how to improve that while I’m updating the code. Until now I had been calculating the angle of the toolpath or the offset surface. I’ve been playing with the competition and they seem to use the original surface as the reference angle. I had tried this before but made some bad mistakes that kept it from being reliable. I’ve come up with some new ideas that should make it work much better and, hopefully, faster.

You’ll also see that I have blue supports now. I had to rebuild my hard drive over the weekend and I ended up with a different video driver version that before. Whenever I see a color change with driver versions it usually mean that I did something wrong or borderline that one driver accepted and one driver didn’t. I’ll have to track this down in the near future as well. 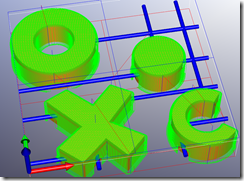