It always seemed a little odd to me that I had to set the tolerance below .001” to get a toolpath that I liked. A thousandth of an inch, in general, should be more than enough accuracy for almost any “normal” application. It wasn’t until the last batch of updates that I came to my code to reduce the number of vertices in a polyline and found old code that I thought had been updated long ago. There was potential for the polyline to be eroded away beyond the tolerance setting specified that needed to be fixed- or so I thought. I rewrote it to work properly and found almost zero improvement. Oh well, at least it’s correct now.

I making this change I was led to an error in the last release where the finish path is reduced by a factor of about 25 more than it should be. It should only be present in the last 2 test releases- never in a download from the main page.

That led me to the toolpath refinement code. It turned out that there was a massive bug that led to toolpath points being put in non optimal places. This meant that you needed to move the tolerance way down to get a really accurate toolpath. This can be seen in highly concave corners where the exact corner is not found. This could be what some have seen when they noted a problem with the pencil toolpaths.

The point here is that the next release should have greatly improved accuracy for an equal tolerance value. I’ll mention it again in the announcement for when I post it but you will almost certainly have to adjust your tolerance values up to hold your old toolpath quality and calculation time. For the tolerance freaks reading this, and you know who you are, this should be a great fix. I hope to get it out in the next week.

Ok so it turned out to be easier to complete than I thought so I’ve posted a shot below of the results. The corners show the benefit of the changes. 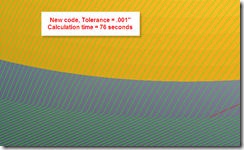 I also realized that the waterline paths should be more accurate too. People with homemade routers may not notice the changes but I think it’ll be a big deal for those with a more rigid machine.

I’m not sure what this will do to calculation time overall so I’ll have to test more. I suspect that the calculation time for a given quality of toolpath will go down. The good news is that the changes to the refining code should make it very feasible to make it support multicore for that step as well.