The pencil algorithm is starting to work well now. Simple paths are no problem as shown by the star shot below. To get paths with some potential ambiguity, like the standard “Cheese Whiz” model, to work I’m going to need some more code and testing. 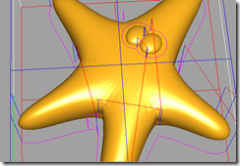 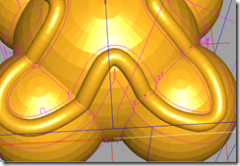 The screen below shows how the internals of the new system work for pencil machining. The system builds a series of x and y passes to find all of the features of the model. These passes, shown in white, are sometimes called CL nets , short for cutter location net. The spacing of the lines is calculated from the tolerance value and the cutter information entered in the toolpath dialog. The spacing of the lines can be relatively wide compared to the old ZMap spacing because each of the line is subdivided along its length to ensure that nothing is gouged.

Pencil points can be found on the cl net by looking at the angles of the lines that make it up. In the photo below red boxes represent the pencil points with green lines pointing away from the model at each point. The shot on the right shows the points only for more clarity. The weird paths shown above are due to problems in connecting all of the pencil points since it’s difficult to calculate the correct way to link a bunch of points with no real information about how the real surface is laid out. 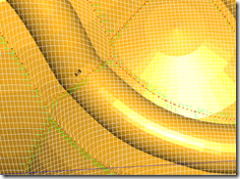 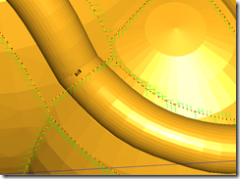