The updates here have not been frequent lately but I’ve been making steady progress on the new finishing algorithm. Below are a few shots that show the current status. Here’s what they show:

1) The new finishing code will preplan the bulk of the path ahead of time rather than building it one the fly like the current versions. This means that the time intensive part, projecting the path onto the model, can be done in a parallel fashion using multiple CPU cores to speed it up.

2) The paths below are fit to the geometry plus a machining margin, .1” (user definable) in the shots below. It will ignore the supports in this calculation so the minimum area is machined and the supports can be thinner since they don’t necessarily have to support long spans.

3) Preplanning the paths means that there can be much more efficient path linking with far fewer retracts. Note how few blue retracts you’re seeing below compared to the current system.

4) The shots below show that the supports now function for multiple part STL files. The old ones didn’t and would fail completely in a case like the one below.

5) The code to do this preplanning is very similar to a pocket algorithm so I think I can port it to roughing for much smoother paths there as well. This will be a big win because it will unify all of the toolpath code and remove any old ZMap-style code from the program. This eliminates a lot of legacy junk that requires tons of testing anytime I make toolpath changes.

There are still a few visible glitches to work out but it’s finally getting to a point that the whole thing can be tested together.

Note- The skewing of the overhead view is a function of the perspective view in MeshCAM. The paths are actually laid out with a perfect .1” boundary. 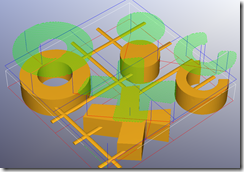 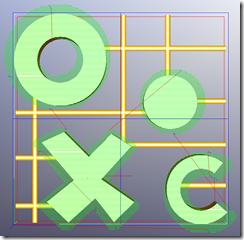