When I was asking my resellers for requests for V4, one of the guys in Japan asked for the ability to load 2D DXF files and machine them. In the past I have always stayed away from 2D stuff because MeshCAM was never made to do it. In the past couple of years the waterline and pencil have gotten good enough that I think the feature would be useful. If you try to load a 2D dxf file you will get the following dialog:

If you click yes, a new 2D dxf loader will try to interpret the file and extrude the curves to a full 3d object. A before and after: 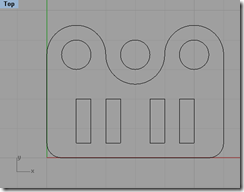 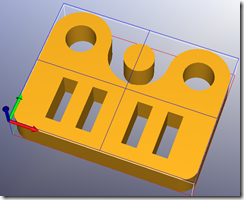 I add the word “try” above because I have now been reminded of why I dislike DXF files- they’re a minefield of compatibility problems. Thankfully, several forum members uploaded DXF files a few months ago for me to test with. Some of the uploaded files showed a amazing amount of insight into what might crash a program- there must have been a few fellow programmers out there.

Gerry gave a short explanation at that time of the various DXF versions and what changed in between- that was very helpful to get a starting point. I think I have V12 almost done and I’ll have to see how far I need to go forward in the specs to get it working for as many people as possible without growing the code to the point that it is unmaintainable.

I mention that this is a new DXF reader because the original 3D one was made to read the triangles only without getting caught up in the other details about 2D and the visual representation that change from version to version. The new loader in is Lua so I can quickly modify it without restarting MeshCAM.

Extruding 2D files may not be too useful to everyone but I promise that the 2D DXF code will be put to good use for other new features.